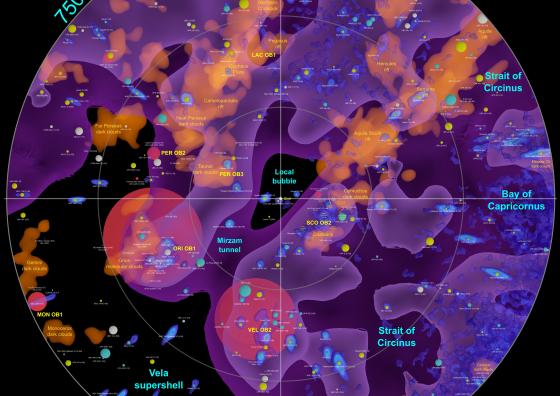 Stellar clusters are groups of gravitationally bound stars, that were formed in the same event and therefore have the same age and chemical composition. The study of open clusters allows a better understanding of the origin and evolution of galaxies. There are two types of stellar clusters; the globular clusters, formed by older stars, and the open clusters, formed by relatively young stars - younger than a few million years old.  The open clusters can only be found in irregular and spiral-shaped galaxies, which have an active stellar formation.

A team from the Institute of Cosmos Sciences has found 582 of this second type of open clusters. They used the data from the European Space Agency’s Gaia mission, which is mapping the Milky Way since it first entered into orbit in 2013. This data package is known as the second Gaia data release DR2.

Researchers have been developing a new method for the study of open clusters during the past two years. Alfred Castro-Ginard, member of the ICCUB's Gaia group, led the research. “We didn’t have any methodology for detecting these objects in a homogenous way before, and we didn’t have such an extended and precise data catalogue either”, he comments. The team used a method based on machine-learning, which they first applied to a small set of data – in a paper published in 2018, and then to a certain part of the galaxy – in a paper published in 2019. “The reason of choosing this method was the release of the second data package of Gaia, which includes more than a thousand million stars. We though than in order to analyse such a big volume of data, we needed to automatize the processes”.

The new methodology allowed the team to identify the overdensities in the galactic disc in the first place. Then, they applied an algorithm that selected those overdensities that were candidates of being open clusters, and applied an artificial neural network. This network checked every candidate, searching for isochronic patterns of colour and magnitude. At the end of the process, they confirmed 582 new open clusters.

“Previously, there were around 1200 known open clusters. Now, we have found 650 new ones – 23 in the first article; 53 in the second, and 582 now - combining Gaia’s data and our new methodology”, explains Castro-Ginard. “Having a complete catalogue of the open clusters and stellar objects in the Milky Way allows us to better study those regions with active stellar formation, the mechanisms of formation and dissolution of clusters in the field, or to calculate certain parameters such as the cluster’s initial function of mass”.

Alfred Castro-Ginard is currently working on his PhD thesis, in which he applies machine-learning techniques to the Gaia’s data sets, aiming to discerning the patterns of open cluster formation, and better understand the galaxy structure.  He also participates in the Gaia’s data validation process, as a member of the DPAC group.

You can read the full article at the journal Astronomy & Astrophysics

BiblioLab, Science for the Young: Cartography of the Milky Way

The director of the Institute of Cosmos Sciences (ICCUB-IEEC),