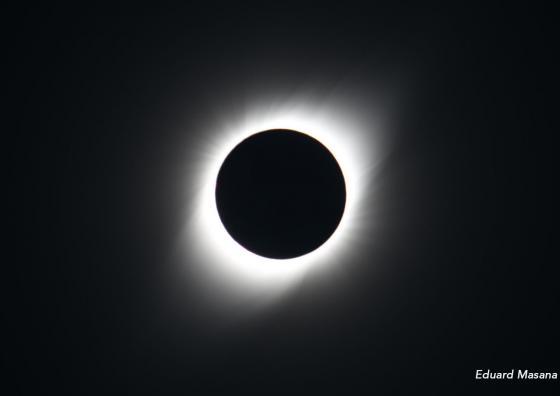 A total eclipse like that of July takes place when the Moon is on the near side of its orbit appearing larger than the Sun, and is completely aligned between the Earth and the Sun. During a total solar eclipse, we can make observations that are usually impossible without special instruments due to the brightness of the Sun, where you can see the " Baily's beads", some bright spots that come from the last few rays of sunlight shining through valleys on the edge of the Moon, the protuberances of the chromosphere or the solar corona.

This is the second solar eclipse of this year, a partial one could be observed the past 6th January and you will be able to see an annular eclipse from Saudi Arabia, India, Sumatra and Borneo (partial from Asia and Australia) on 26th December

NEVER LOOK DIRECTLY AT THE SUN WITHOUT PROPER PROTECTIVE GEAR.

Always remember watching the sun without taking appropriate precautions may cause serious eye injuries that can even lead to permanent loss of vision.

Map of the eclipse

The Total eclipse 2n July will be especially interesting for the inhabitants of northeastern Chile and Argentina.

Specific local features of the Eclipse

Broadcast of the eclipse