Which are the most favourable environments for planet formation? 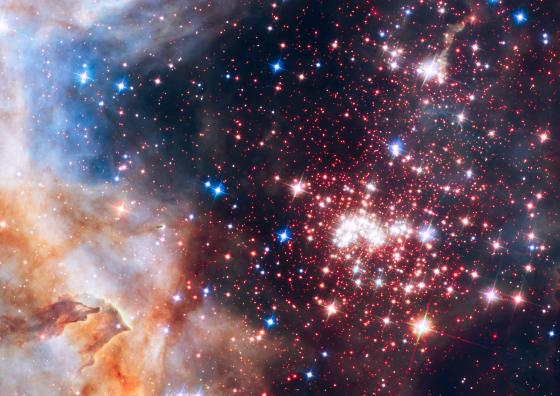 The Hubble telescope of the European Space Agency and the NASA reveals that the planets have difficulties to form in the centre of the star cluster Westerlund 2. The ICREA professor and ICCUB astronomer Mark Gieles is one of the authors of the study, and contributed to the results’ analysis and interpretation.

Young stars are circled by the protoplanetary discs, made by dense gas and dust, where the physical processes of planetary formation take place. Astronomers believe that the location of the stars inside a cluster determines the possibilities of planet formation. To evaluate this hypothesis a team of researchers studied, during three years, the cluster Westerlund 2, in order to determine which are the most favourable environments for planetary formation.

Westerlund 2 is a young massive cluster, about 1 to 2 million years old, located in the Milky Way 20.000 light-years away from us. Researchers chose it because it has an active star formation, a high density of young stars and shows certain patterns similar to those of our Solar system during its formation. This star cluster contains some of the hottest, brightest, and most massive stars known. “The ambient environment of this cluster is constantly bombarded by the strong stellar winds and ultraviolet radiation from these giants that have masses of up to 100 times that of the Sun”, explains team member Danny Lennon of the Instituto de Astrofísica de Canarias and the Universidad de La Laguna.

The study shows that the stars in the centre of the cluster lack the huge dust clouds where planetary formation happens. This absence is caused by the cluster’s most massive and brightest stars, that tend to concentrate also in the centre, eroding and dispersing the discs of gas and dust of neighbouring stars, so planets have a tough time forming in this central region of the cluster. On the other hand, astronomers do observe large clouds of dust embedded in the disks around the stars located on the periphery of the cluster.

These findings led them to conclude that the probability of planets forming is higher for the stars farther from the centre of the cluster, as they do not have to live with the large massive stars. “Basically, if you have monster stars, their energy is going to alter the properties of the discs,” explained lead researcher Elena Sabbi, of the Space Telescope Science Institute in Baltimore, USA. “You may still have a disc, but the stars change the composition of the dust in the discs, so it’s harder to create stable structures that will eventually lead to planets. We think the dust either evaporates away in 1 million years, or it changes in composition and size so dramatically that planets don’t have the building blocks to form.”

“A major conclusion of this work is that the powerful ultraviolet radiation of massive stars alters the discs around neighbouring stars,” said Lennon. “If this is confirmed with measurements by the James Webb Space Telescope, this result may also explain why planetary systems are rare in old massive globular clusters.”

Article at The Astrophysical Journal Time-domain Study of the Young Massive Cluster Westerlund 2 with the Hubble Space Telescope. I.

Mark Gieles is an ICREA professor and an astronomer at the Institute of Cosmos Sciences, where he researchers about the formation and evolution of stellar clusters, with the aim of deepening our knowledge about the stellar initial mass function, black holes, gravitational waves and the dark matter distribution in galaxies. He has also proposed models to detect black holes in star clusters, through data obtained with the Gaia satellite and other space surveys, and models of the formation of these same star clusters.

A population of black holes at the globular cluster Palomar 5

Language
CA
The international group of researchers from the Sloan Digital Sky Survey (SDSS) today publishes a comprehensive analysis of the largest three-dimensional map of the Universe ever created, filling in the most significant gaps in our exploration of the cosmos’ history.

Language
CA
The detection of a gamma-ray burst by MAGIC telescopes allows to study whether the speed of light in a vacuum is a constant of nature.