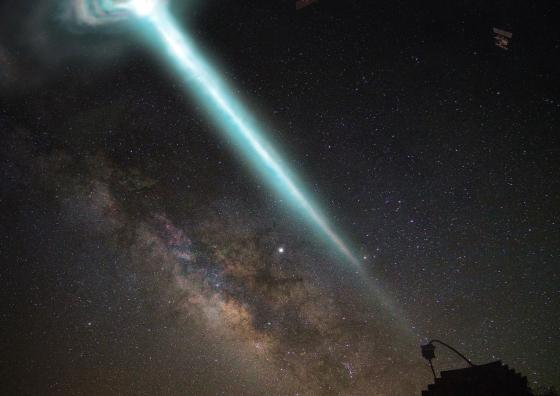 The detection of a gamma-ray burst by MAGIC telescopes allows studying whether the speed of light in a vacuum is a constant of nature.

Einstein’s theory of relativity states that the speed of light in a vacuum is a constant, independent of the energy of photons. In a study published in the journal Physical Review Letters, an international team of researchers has tried to test this postulate using observations of a gamma-ray burst (also called gamma-ray burst, or GRB) detected in January 2019 by the two MAGIC telescopes in La Palma. The results show that photons of different energies, emitted about 4.5 billion years ago, arrive at the Earth with a time difference smaller than one minute, setting a limit to the hypothesis that the speed of photons depends on their energy.

The attempt is well-founded; Einstein’s theory describes gravity as a result of the interaction of mass with space-time, and his predictions have been verified in numerous experiments. However, physicists suspect that there is a more fundamental theory, of quantum nature, still unknown. Some of the quantum theories of gravity that have been proposed include the possibility that the speed at which photons travel in a vacuum depends on their energy. This hypothetical phenomenon is called the Lorentz invariance violation (LIV). It is believed that in case it exists, the difference of speed would be too small to be measured, unless its effect accumulates over long periods or long distances, as occurs in GRBs emissions detected on Earth.

Gamma-ray bursts, the most violent explosions of the Universe

GRBs are brief flashes of very high-energy photons (or gamma-rays) emitted by distant cosmic explosions. Photons produced by GRBs travel for billions of years before reaching Earth, which could make the effect of hypothetical differences in their velocity measurements. Also, quantum gravity theories predict that this difference would be greater the higher the energy of the photons. It is therefore expected that very-high-energy gamma-ray telescopes, such as MAGIC, will be especially competitive in the search for the effects of the Lorentz invariance violation.

GRBs occur at unpredictable times and places in the sky. There are GRBs detectors on board of satellites orbiting around the Earth, with a very wide field of view that allows them to detect and locate GRBs almost instantaneously when they are produced. Once they detect a GRB, they send the alert to ground-based telescopes around the globe, such as MAGIC, to participate in its observation and study. Fifteen years ago, the Burst Alert Telescope (BAT) on board of the Swift satellite warned of the occurrence of a GRB in the very-high-energy gamma-ray band (or TeV band). On January 14, 2019, MAGIC telescopes detected it for the first time. The so-called GRB190114C could be detected thanks to the fact that MAGIC began its observation only 50 seconds after it occurred, as the alert system accurately locates and calculates the coordinates of the event in the sky.

The ICCUB researcher and professor at the University of Barcelona, Marc Ribó, comments “One of the most positive aspects revealed by the detailed study of the GRB190114 is that it is a fairly common GRB. This is good news because it means we’ll probably spot more. Our detection inaugurates a new phase in the search of the effects of LIV in observations of gamma-ray cosmic sources”.

Scientists wanted to use this observation to look for quantum gravity effects. At first, they encountered an obstacle; the gamma-ray signal recorded by MAGIC decreased monotonically over time. Although this is an interesting fact to understand how GRBs are produced, it is not so interesting to look for Lorentz invariance violation effects. Daniel Kerszberg, a postdoctoral researcher at IFAE and one of the main authors of the study, explains “To know if gamma-rays travel at different speeds, we need to be able to compare the arrival times of the gamma-rays emitted by the GRB at the same time. As it is not possible to know the precise moment of the emission of individual photons, we usually use the sudden temporal variations of the signal to recognize photons that were probably emitted at the same time". But a monotonically decreasing signal lacks these variations. So the researchers used theoretical models to describe the temporal evolution of the emission in the TeV band, in the interval between the beginning of the GRB and the observations of MAGIC. Kerszberg adds: "To search for LIV signals in our data, we used two different ways to model their temporal evolution. We wanted to be sure not to make mistakes in concluding from this exceptional signal".

Testing the quantum nature of space-time

The data analysis found no significant difference in the speed of gamma-rays of different energy. However, the effort wasn't useless, as MAGIC scientists managed to set limits to possible theories of quantum gravity. This is what Javier Rico, IFAE researcher in Barcelona, explains, "The GRB190114C occurred when the Earth was still forming, 4.5 billion years ago. Since then, the gamma-rays emitted at that time have been travelling through the Universe, until just over a year ago, when we detected hundreds of them with the MAGIC telescopes. By analysing them, we have been able to determine that the travel time of different photons differ as a maximum in approximately one minute".

The limits to quantum gravity that have been obtained in this work are compatible with those that already existed, and are the first to be obtained by observing a very high energy GRB. With this study, the MAGIC team has established a starting point for future research in the search for measurable effects of the quantum nature of space-time. Oscar Blanch, IFAE researcher and spokesperson for the MAGIC Collaboration, tells us, "We are confident that future detections of GRBs to the TeV band will include the initial emission, before monotonous decrease, which is expected to be rich in temporal structure. That will increase our ability to find LIV effects significantly".

MAGIC (Major Atmospheric Gamma Imaging Cherenkov) is a system of two 17-metre diameter telescopes located 2200 metres above sea level at the El Roque de los Muchachos Observatory (ORM), on the Canary island of La Palma, Spain. The telescopes are designed to detect very-high-energy gamma-rays in the energy range from 30 GeV to more than 50 TeV, using the atmospheric Cherenkov imaging technique. MAGIC telescopes are operated by an international collaboration of approximately 280 people from 12 countries, including scientists, engineers, technicians and other personnel.

The Spanish community has been participating in MAGIC since the beginning. Currently, members of MAGIC are the Institute of Cosmos Sciences (ICCUB), the Institut de Física d'Altes Energies (IFAE), the University of Barcelona and the Autonomous University of Barcelona, the Center for Energy, Environmental and Technological Research (CIEMAT), the Complutense University of Madrid (UCM) and the Instituto de Astrofísica de Canarias (IAC). The Institut d'Estudis Espacials de Catalunya (IEEC) is participating in the project through researchers from the ICCUB and CERES-UAB units. Besides, the MAGIC data centre is the Port of Scientific Information (PIC), a collaboration between IFAE and CIEMAT.

What are gamma-ray bursts?

What are gamma-ray bursts? They are cosmic explosions, with radiation up to a trillion times the energy of visible light. This illustration shows the set-up for the most common type of gamma-ray burst. The core of a massive star (left) has collapsed and formed a black hole. This “engine” drives a jet of particles that moves through the collapsing star and out into space at nearly the speed of light. The prompt emission, which typically lasts a minute or less, may arise from the jet’s interaction with gas near the new-born black hole and collisions between shells of fast-moving gas within the jet (internal shock waves). The afterglow emission occurs as the leading edge of the jet sweeps up its surroundings (creating an external shock wave) and emits radiation across the spectrum for some time — months to years, in the case of radio and visible light, and many hours at the highest gamma-ray energies yet observed. These far exceed 100 billion electron volts (GeV) for two recent GRBs.

Link to the article

Marc Ribó is an astronomer, professor at the Faculty of Physics and a researcher in the research group in High Energy Astrophysics, where he investigates the high-energy astrophysical sources, mainly those of galactic origin. Specifically, he has studied binary X-ray and gamma ray systems, which contain black holes and neutron stars. He has supervised three doctoral theses and published more than 350 scientific articles. Ribó is also a member of the management team of the Institute for Space Studies of Catalonia (IEEC) and director of the Montsec Astronomical Observatory.

Language
CA
The international group of researchers from the Sloan Digital Sky Survey (SDSS) today publishes a comprehensive analysis of the largest three-dimensional map of the Universe ever created, filling in the most significant gaps in our exploration of the cosmos’ history.

Which are the most favourable environments for planet formation?

Language
CA
The Hubble telescope of the European Space Agency and the NASA reveals that the planets have difficulties to form in the centre of the star cluster Westerlund 2.

Language
CA
The Joan Oró telescope, in coordination with various telescopes around the world, tracked the BepiColombo flyby of the Earth in the only time the mission approaches our planet on its way to Mercury.