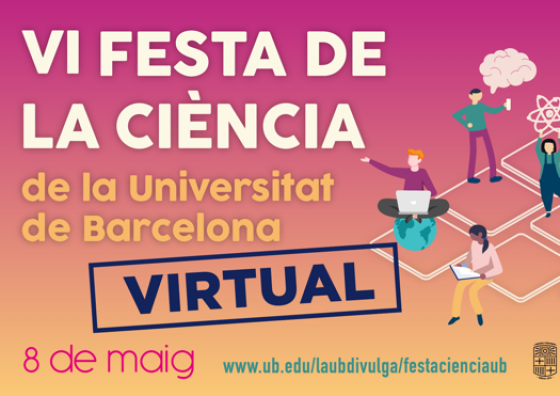 This year's edition of the Science Festival of the University of Barcelona, ​​organized by the Scientific Culture and Innovation Unit "La UB Divulga", is held virtually.

Scheduled for May 8 and 9 for both schools and families, usually researchers explain and organize experiments about their ongoing research. In this edition, the traditional interactive workshops have been transformed into a series of videos on various scientific phenomena. ICCUB researchers present three workshops in the 2020 edition.

Created by astronomers from our institute, in the 3D constellation workshop we build the Orion constellation, taking into account both the position and distance of its stars.

Do you know what the Orion constellation is? Known in ancient times as "The Hunter", if we get closer, what shape does it have?

In the virtual edition of the workshop, you can discover how perspective influences how we see the stars in the sky. Our astronomer Eduard Masana will show you that they are not separated by the same distances, but can be very far from each other.

Quarks: The bricks of matter

Based on the puzzle designed by CERN, in the workshop "Quarks: the bricks of matter" our researchers in nuclear physics propose several 3D combinations of the most fundamental pieces of matter, in order to form the protons and neutrons that build the atomic nuclei.

In the virtual edition, our researchers Assumpta Parreño, Marc Illa, Gloria Montaña and Íñigo Asiáin explain to you the theory of the Standard Model, which includes the fundamental particles and their interactions. Do you know what quarks are? How do they combine to form protons and neutrons?

The workshop includes two labs. The Quantum Lab, with programs in quantum physics phenomena; and the Classical Lab, with a program on classical quantum mechanics and two models about solitons.

The Institute of Cosmos Sciences of the University of Barcelona (

Presentation of the App “Saved by the Paradox”

The Institute of Cosmos Sciences of the UB is collaborating again

On the occasion of this year's virtual edition of the VI Science Festival of the UB, the astronomer Eduard Masana explains in this video that it is the 3D Constellation Workshop, where the Orion constellation is built.
Author
Eduard Masana, ICCUB-IEEC
Language
CA
Popularisation of Science

The eclipse that changed our vision of the universe

Article of the astronomy section of the newspaper El Periódico "Diari Astronòmic", by Eduard Masana and Salvador Ribas, about the solar eclipse of 1919
Author
Eduard Masana, ICCUB
Language
ES