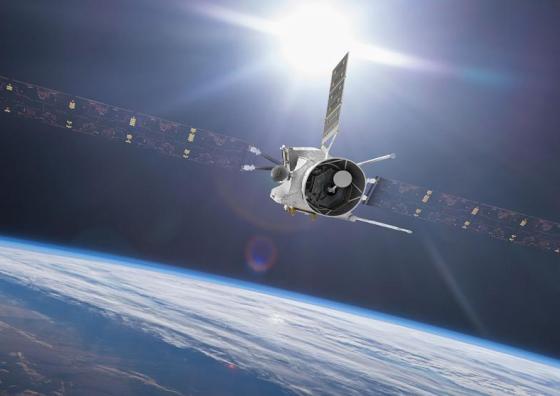 The Joan Oró telescope, in coordination with various telescopes around the world, tracked the BepiColombo flyby of the Earth in the only time the mission approaches our planet on its way to Mercury.

On the night of last Friday, April 10, the BepiColombo space mission made a flyby of the Earth, an approach manoeuvre to take advantage of its gravitational impulse. This was the only time that the space mission will come close to our planet on its journey to Mercury. Several telescopes and observatories around the world coordinated to track the probe from the Earth's surface, with the idea of obtaining astrometric and photometric measurements. One of the telescopes was the Joan Oró Telescope, located at the Montsec Astronomical Observatory in Lleida.

BepiColombo is a joint mission of the European Space Agency (ESA) and the Japanese Aerospace Exploration Agency (JAXA) to the planet Mercury, in orbit since October 2018. It is the first European mission to Mercury, where only two NASA probes have arrived. The goal of the mission, which plans to reach the smallest planet in our solar system in 2025, is to conduct a comprehensive study of Mercury, and describe its atmosphere and surface, its internal structure, magnetic field, and magnetosphere.

The coordination of the BepiColombo follow-up arose from a proposal by the European Space Agency itself. The researchers used information about the spacecraft's trajectory and expected magnitude to track the probe during its flyby. The main challenges were the high speed (100.000km/hour) and low height (10.000km) at which BepiColombo travelled. Typically, telescopes observe astral objects by compensating for Earth's rotational motion. But in this case, since the apparent speed of BepiColombo was very high, it was necessary for the telescopes to follow the spacecraft during the exposures. To be able to tell the telescope where to look at each moment, researchers calculated an approach orbit for the spacecraft, as if it was a nearing asteroid.

Using that calculation, scientists prepared some of the telescopes that the European Space Agency routinely uses; the Catalan Joan Oró telescope, the Zadko telescope in Australia, and the Springbok and Poland observatories, in Namibia and Chile respectively. The latter managed to capture the entrance and exit of BepiColombo in the shadow of the Earth, and both Zadko and Joan Oró were able to perform the follow-up observations. From the mainland, the mission was visible across the sky from the southeast to the southwest direction, between 5.30am and 6.00am. The closest point of the approach occurred at 6.25am, when BepiColombo passed at a distance of 12,700km from our planet.

The observation campaign was led by ICCUB's astronomer Toni Santana-Ros. Devoted to the observation of exoplanets, stars and other bodies and phenomena of the solar system, the Joan Oró telescope is the largest and most technologically advanced in Catalonia, and can be controlled both in person and from a distance. Researchers from the Institute for Space Studies of Catalonia (IEEC) coordinate the telescope, which is a part of the Montsec Astronomical Observatory, directed by our researcher Marc Ribó.

As Toni Santana-Ros tells us, the campaign of observations had three defined objectives, the first two relating to the activity of the European Space Agency around the observation of near-Earth objects, known as NEO. "First, the researchers wanted to check the effectiveness of the agency’s network of telescopes dedicated to the coordinated observation of NEOs, that could be at risk of impact. In addition, it was intended to be used to disseminate the mission and activities of ESA on monitoring dangerous asteroids", explains Santana-Ros. As for the third objective of the mission he says, "From a scientific point of view, we were interested in taking astrometric and photometric measurements of the object, in order to compare them to our models so we could measure their validity. We have a series of models that we use to determine the physical parameters of dangerous asteroids approaching the Earth. When we observe this kind of objects, the models allow us to determine some characteristics - as their size, mass or density-  by making a series of assumptions about other parameters. We also calculate the distance from the object to the earth, or the object’s trajectory. As all these parameters are known in detail by BepiColombo, we wanted to compare them to our values so we could measure its efficiency”. The researcher’s goal is to publish an analysis of the validity of their methods.

In the course of its approach, the Bepicolombo mission itself also recorded images of the Earth, at a speed of 100,000 km per hour.

For more information, read the news about the mission of the European Space Agency, or visit the BepiColombo's infographics.

You will find more details about the Joan Oró Telescope at the Observatorio Astronómico del Montsec website.

Toni Santana-Ros is an astrophysicist. He obtained his doctorate in the field of Science of the Solar System and Asteroids, and has worked as an engineer at the European Space Agency. Since 2019, he is a postdoctoral researcher in Solar System and Minor Bodies at the Institute of Cosmos Sciences, and also works with the Joan Oró telescope at the Montsec Astronomical Park.

Marc Ribó is an astronomer, professor at the Faculty of Physics and a researcher in the research group in High Energy Astrophysics, where he investigates the high-energy astrophysical sources, mainly those of galactic origin. Specifically, he has studied binary X-ray and gamma ray systems, which contain black holes and neutron stars. He has supervised three doctoral theses and published more than 350 scientific articles. Ribó is also a member of the management team of the Institute for Space Studies of Catalonia (IEEC) and director of the Montsec Astronomical Observatory.

Exoplanets: Planets beyond the Solar System

ICCUB researcher and scientific communicator Toni Santana-Ros will give the talk "Exoplanets: Planets beyond th

Here are the winners of the drawing contest “Draw your own Asteroid!” 2021

From the Institute of Cosmos Sciences of the University of Barcelona (ICCUB) we are very pleased to announce the winners of the drawing contest “Draw your own Asteroid!” 2021.