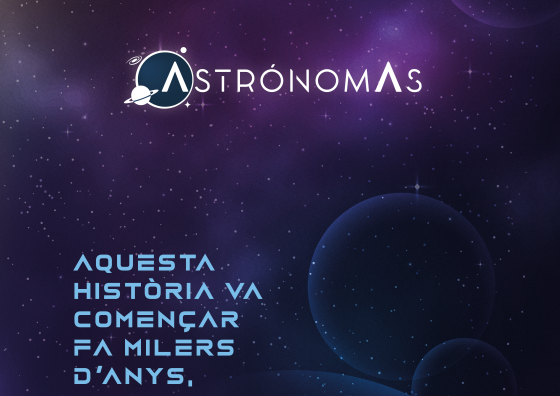 Calendar of the AstrónomAs Exhibition

The new exhibition ‘AstrónomAs’ focuses on women who have dedicated their nights and days to the study of astronomy. Its digital version, on the web www.astronomas.org, includes information on 270 astronomers who work or have worked in one or more of the fourteen disciplines in which the sample has been structured, and also includes the most varied ethnic accents, geographic scope, professional category or functional diversity.

The sample is heir to the exhibition 'Con A de astrónomas', which was created within the framework of the International Year of Astronomy 2009 and which has visited hundreds of cultural centers, libraries and secondary schools throughout Spain throughout the last decade. With this same itinerant purpose, ‘AstrónomAs’ also has a physical version of 16 explanatory panels that will be available in Spanish, Galician and Catalan.

In addition to the information about each of the astronomers, 'AstrónomAs' is complemented with various materials that include a contextualization of astronomy with other sciences, its relationship with culture (cinema, literature, art, etc.), downloadable pedagogical booklets, interactive games, podcast and videos. All this covered by an original soundtrack composed by Paula Espinosa, a young future astrophysicist and musical talent, a finalist in 2020 for the La Voz de Antena 3 TV program.

The exhibition 'AstrónomAs' has been carried out by an interdisciplinary group of people from both the field of astronomy and the history of science and teaching at different levels, and thanks to the collaboration of the Spanish Foundation for Science and Technology of the Ministry of Science and Innovation. The Spanish Astronomy Society is one of the sponsors of the exhibition.

One of the objectives of the 'Astronomers' exhibition is to promote scientific and technological vocations in general, and among girls and adolescents in particular, in addition to disseminating research carried out by women scientists in astronomy and astrophysics, related innovations and perspectives future in these fields.

With all this, it is intended not only to increase the scientific, technological and innovative culture in Spanish society, but also to improve scientific-technical education at all levels, especially among young people.

The kick-off of the face-to-face exhibition ‘Astronomers’ will take place on September 29 at 11:30 am in Santiago de Compostela. The inauguration will be promoted by the Vice President for Equality, Culture and Services of the University of Santiago de Compostela and will be attended by Josefina F. Ling, curator of the exhibition and member of the Spanish Astronomy Society.

The sample will be available during Science Week at the Faculty of Physics of the University of Barcelona. Details will be published shortly.

Henrietta Leavitt, the seed to discover the extragalactic world

The astronomer Carme Jordi (ICCUB-IEEC) will introduce the figure

By
Carme Jordi, ICCUB-IEEC
Place
Historic Building of the University of Barcelona
Time
17:00
18:30
Talks
Open to all

The new itinerant exhibition of the Institute of Cosmos Sciences,

Àgora - Encounter among female scientists and schools on exoplanets and space

In the context of the second Biennal City and Science of Barcelona's City Council, the astrophysicist A

Gaia: the machine of discoveries

In the framework of the International Day of Woman and Girls in Science, our astronomer Mercè Romero will give this conference on Tuesday, February 11th.

The exhibition "Scientific Catalan 2.0", born in 2020 aims to give greater visibility to the strategic role of women scientists of our country, who care about communicating science to contribute to creating and disseminating roles and female models,
Author
Associació Catalana de Comunicació Científica
Language
CA
ES
EN
Popularisation of Science

Why Physics? 291 Woman explain it

This video is a compilation of all the participations on the Instituto de Física Teórica IFT's initiative #YoFisica, in the frame of the International Day of Woman and Girls in Science.

The Sociedad Española de Astronomía, together with the University of Sevilla and illustrator Raquel García have created a new versions of the theatre play "Woman scientist: past, present and future