Six Nobel laureates in the International Conference on Atomic Physics 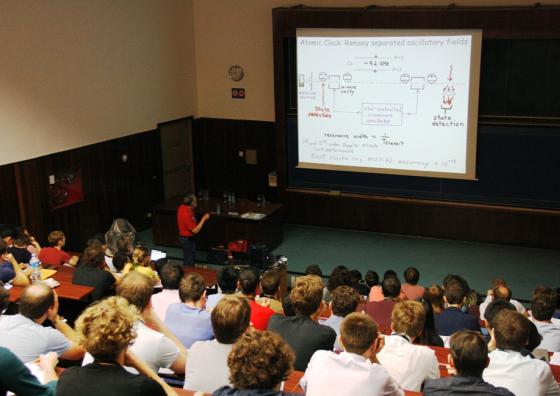 From the 22nd to the 27th July, Barcelona will hold the 26th International Conference of Atomic Physics, ICAP20018, the most important conference on atomic physics worldwide which gathers scientists from around the world and will gather six Nobel laureates.

Organized by the University of Barcelona, Universitat Autònoma de Barcelona, the Institute of Photonic Sciences (ICFO) and Universitat Politècnica de Catalunya, the conference will take place in the Palau de Congressos de Catalunya (Palace of Congresses) and will gather international experts, who will share results and views on atomic physics, focusing on topics such as computing and quantum communication, intense fields and ultrafast science, among other issues.

The first ICAP conference was held in 1968 and since then, it has become one of the most known conferences worldwide. Every two years, participants have the chance to share and debate on new findings that are carried out in the field of atomic physics, a research field which has evolved in an unexpected way and opens a new world regarding the understanding of the atomic structure, the generation of laser light, the development of cooling and trapping techniques for atoms and ions, as well as the achievement of Bose Einstein condensation and degenerated Fermi gases, among others.

According to the organizers of the conference, Maciej Lewenstein (ICFO), Veronica Ahufinger (UAB) and Bruno Julià-Díaz (ICCUB), “ICAP is the most important conference regarding atomic physics. The debated results in this activity represent la crème de crème in current research, both regarding fundamental frontiers and technological challenges”.

As an activity to carry out before the conference during this week, the Faculty of Physics is holding the ICAP Summer School 2018, with a hundred PhD students and young researchers from around the world, in which experts from the field of atomic physics such as the Nobel laureate in physics William D. Phillips or the researcher from the Max Plank Institute (Germany) Ignacio Cirac will participate.

The first activity will take place on Tuesday, July 24 at 6 p.m. and will count on the participation of six Nobel laureates, who will share their views on the field’s trends, recent achievements and future discoveries. The Nobel laureates to attend this session are:

Presentation of the new International System of Units

The second activity will take place on July 26 at 7.30 p.m. and will count on the presence of Nobel laureates William Phillips and Vanderlei Bagnato, who will present the new International System of Units (SI). In this new metrics system to be applied in 2019, four of the units we use (kilogram, ampere, kelvin and mole) will be redefined in terms of nature physical constants, based on fixed numerical values of the Plank constant (h), the elementary charge (e), the Boltzmann constant (kB), and the Avogadro constant (NA), respectively.

In the conference, speakers will explain the meaning and importance of this change and will show how these definitions will be put into practice. This second event is made possible thanks to the Ignacio Cirac – Fundació Catalunya – La Pedrera Chair in ICFO and Cellex Foundation.

The 26th International Conference on Atomic Physics, ICAP 2018, was held from July 22 – 27, 2018 in Barcelona. During the conference it was organized the outreach activity "Atomic Physics: past, present and future". A Nobel prize panel with five physics Nobel prizes, covering the most important developments in the field of atomic physics.

The ICAP 2018 will host a panel discussion with six Nobel laureates, some of the key players in the development of the field, on the main achievements of atomic ph