NÜWA, a new city on Mars 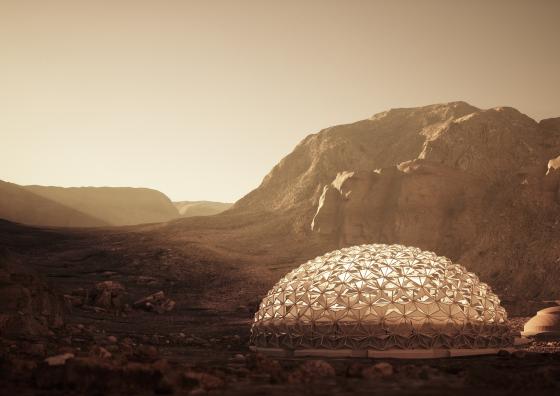 Catalan researchers lead project selected among the finalists of the Mars Society competition to develop a city on the red planet.

The project of the international team “The Sustainable Offworld Network" (SONet) has been selected as one of the ten final proposals in the Mars City State Design competition of the Mars Society, the world’s largest and most influential space advocacy organisation dedicated to the human exploration and settlement of the planet Mars. The contest focuses on developing a city of one million people on Mars in a sustainable way. The team is composed of researchers from the Institute of Space Studies of Catalonia (IEEC), the Institute of Space Sciences (ICE, CSIC), Institute of Cosmos Sciences (ICCUB) and the Polytechnic University of Catalonia (UPC).

scientists of several research institutes, together with other research centres throughout Spain and the architecture and design team ABIBOO studio. Participants from other countries such as the United Kingdom, Germany, the USA and Argentina are also part of the team.

How a city on Mars would look like? How would trade work? How would the urban population evolve?

The SONet team imagined the Mars city NÜWA, detailed in a comprehensive project that includes scientific, engineering, architectural, economic and social aspects. The project proposes not only a feasible urban design but also a socio-economic development plan, as well as high-level descriptions of the industry, infrastructure, generation and distribution of energy and services needed to make it a reality.

The team forged the project during online meetings in April, May and June 2020 amid the confinement due to the COVID-19 pandemic. The proposal consists of a 20-page long report with a conceptual design combining a wide range of aspects, from space exploration to sustainability. The city, called NÜWA in honour of the Chinese goddess who created humanity, symbolises the beginning of a new era of our civilisation on Mars and the protection that must be ensured in such an inhospitable world.

"The proposal is an effort to combine many disciplines in a way that is not usually done in space projects" explains Guillem Anglada-Escudé, researcher of ICE and the team’s coordinator. "In addition to scientists and engineers, we wanted from the very beginning to incorporate experts in other disciplines and from outside the academic sector."

Our astronomer and ICREA professor Jordi Miralda is one of the researchers of the SONet team. "Scientists from different disciplines, especially those of us who study the Universe and the physical principles governing it, should help disseminate the technological and scientific knowledge that will allow humanity to start a new era of expansion of our inhabited territory to space", he says. "Mars offers a great scenario for the first chapter of this expansion to the Universe".

"Reaching the final is already a great success for us", explains Miquel Sureda, from ESEIAAT. "We hope the competition will provide us with the visibility we need to gather support and develop concepts related to both space and sustainability, and the necessary transformation of the productive system that we must also face here on Earth.”

The proposal also studies issues such as the use and abuse of plastics, construction and material solutions that minimise the intensive use of energy and total recyclability. "Performing these exercises also makes us realise the great dependence we have on what our planet gives us in return for nothing”, the co-author of the initiative and director of the Institute of Energy Technologies, Ignasi Casanova, explains. "For example, the production of food requires a huge amount of energy, which comes from the Sun, but which involves the use of large areas of arable land. It is therefore one of the most aggressive human activities towards the terrestrial ecosystem.”

The presentation will take place on Saturday, 17 October 2020 at 22.00 (CEST), via 'Facebook Live'. Viewers must register free to the 23rd Annual International Mars Society Convention.

Dark matter, the formation of galaxies, and gravitational lenses

The existence of dark matter in the Universe has been corroborated by a great diversity of observations.

James Webb Space Telescope. The new tool to observe the faintest, more distant and more primitive galaxies of the Universe

The key astronomical date of this December is, without question,

Astrophysics began when observations of astronomy could be interpreted according to the physical laws governing the stars and other objects in the Universe.

The Solar System is home to a huge number of asteroids. Most of them lie between the orbits of Mars and Jupiter.

The Llull's work and modern science

From the philosophy of Ramón Llull we can extract some concepts of modern science. In this article, we can see a critical version of the thought of Ramón Llull.
Author
Jordi Miralda, ICREA-ICCUB
Source
Revista Mètode
Language
CA
Monograph