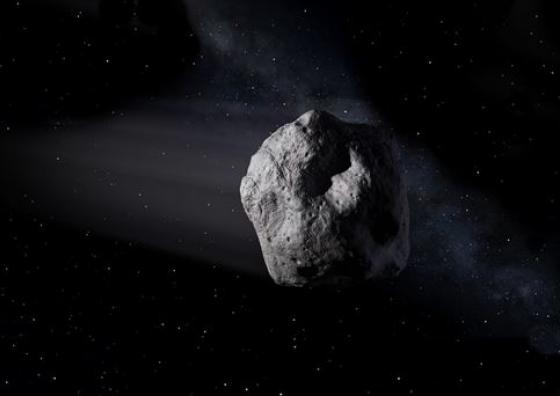 The Solar System is home to a huge number of asteroids. Most of them lie between the orbits of Mars and Jupiter. The first asteroid was discovered in 1801; by 1900, nearly 500 were known, and modern techniques for surveying the skies have led to orbit determinations of hundreds of thousands of them. One of the telescopes that explores the sky taking frequent images over large areas and looking for streaks left by a moving asteroid is PANSTARRS 1, located in Hawaii. On October 20th, one of the many new asteroids that are discovered every day was detected by PANSTARRS, but this one showed a very peculiar behavior: as more observations were collected to determine an orbit, it became clear that it was moving much faster than any other known object in the Solar System. This meant that this new asteroid, designated as A/2017 U1, was not a Solar System object, but it had come from another star.

All objects in the Solar System move on elliptical orbits, as Kepler first found in the 16th century. This is a result of their motion under the gravitational attraction of the Sun, as explained by Isaac Newton. At any distance from the Sun, there is a maximum velocity at which an object following the path of an ellipse can move. If it moves any faster, then it will follow instead a hyperbola, a different trajectory that is not closed and implies that the object will escape from the Solar System.

Asteroid A/2017 U1 is the first object ever seen to be moving on a hyperbolic orbit around the Sun. It came into the Solar System from interstellar space, moving at a speed of 26 kilometers per second. It sped up as it fell closer to the Sun, moving as fast as 87 kilometers per second at its closest approach, which occurred on September 9th, when it came closer to the Sun than planet Mercury. Then, on its way out, it passed close to the Earth during the month of October, making it more easily visible and allowing its discovery by PANSTARRS. The object is only 400 meters in diameter, which makes it a very faint point of light that was hard to spot even at its closest approach to Earth. It is now moving further away, back to the coldness of interstellar space in which it probably spent billions of years before stumbling by chance into the Solar System.

Astronomers have been conjecturing for many years that, if most stars in the Milky Way form planetary systems around them in a similar way as planets were formed around the Sun, many small asteroids should be thrown out into space during the process of planet formation. Protoplanetary disks of gas and dust have been observed around young stars, in which the dust particles are believed to gradually coalesce into bigger chunks until they become asteroids. Further growth of these asteroids leads eventually to the formation of larger planets like the Earth. But the discovery of a wide diversity of planets around stars in recent years has shown that most planetary systems look very different from the Solar System: we often find planets as massive as Jupiter to be very close to their stars. These extremely massive planets cannot be made of rocky materials, but are made mostly of gaseous hydrogen, and they have to form far from the star, where the hydrogen gas can be accreted. Therefore, astrophysicists have hypothesized that these massive planets moved from distant orbits in a process called radial migration, being eventually left in very small orbits close to their stars (often closer than Mercury is to the Sun).

The radial migration of massive planets can be caused by the interaction of material in the protoplanetary disk with the planet. As the gas, dust and rocks in the disk come close to the massive planet, the gravitational scattering that occurs leads on average to the planet losing energy and moving closer to the star, while the scattered objects gain energy and move outwards. In fact, some of the small rocks or asteroids that interact with the planet can receive large velocity kicks, and may be directly thrown out of the gravitational pull of their star. In this way, many small asteroids could become interstellar vagabonds.

This is the origin that seems most likely for the hyperbolic-orbit asteroid we have just discovered: it may have formed around any of the hundred billion stars that populate the disk of our Milky Way galaxy, when its parent star was very young and surrounded by a protoplanetary disk, containing a huge number of asteroids in which planets were forming and radially migrating. Actually, this asteroid never showed any cometary tail despite coming very close to the Sun, implying that it contains no ices that can evaporate, and that therefore it was expelled from the inner region of a protoplanetary disk, where the heat from the star light prevents ice condensation and makes dry asteroids that contain only rocky material.

Stars have been forming in the Milky Way disk at a roughly constant rate over its age of about 10 billion years, so this asteroid could have been spewed out from its parent star at any random time over the last 10 billion years. The star from which it originated is probably very far from us at present; in fact, the asteroid has likely orbited many times around our Galaxy, spending billions of years in the solitude of interstellar space. This story is consistent with the velocity of 26 kilometers per second at which the asteroid was moving when it approached the Sun: this is the typical velocity difference between random stars in the disk of our Galaxy.

How likely is it that an asteroid lost among the stars, like A/2017 U1, comes as close to the Earth as this one did? The answer depends on how many of these asteroids are tossed into space by every star over its lifetime. The most optimistic estimate we can make is that every star in the Milky Way was formed with a protoplanetary disk containing about as much mass as the star itself, and that all the dust contained in that mass formed asteroids. If a large fraction of these asteroids ended up being ejected into interstellar space by Jupiter-like planets as they were migrating, it can be estimated that as many as 1015 asteroids similar to A/2017 U1 were ejected by each star. With a total population of 1011 stars in the Milky Way, we could have as many as 1026 roaming asteroids larger than 400 meters in diameter orbiting through the Milky Way disk. This number of interstellar asteroids would imply that at any time, there are a few of them passing within the orbit of Saturn (or a distance from the Sun 10 times larger than the Earth’s orbit). These objects would be extremely difficult to detect unless they come close to the Earth, and with these numbers, perhaps only one asteroid every 30 years would come as close to the Earth as A/2017 U1 has come.

The discovery of this asteroid on a hyperbolic orbit therefore has profound implications: first, to have a reasonable chance of having discovered this object, it seems likely that that most stars do indeed eject into space an enormous number of asteroids, amounting to a total mass of rocky material similar to the one contained today in all the planets of the Solar System. Second, if we can improve our surveying capacity to search for fainter asteroids which are passing through the Solar System, we should discover many more of them. In fact, a large improvement in our sensitivy to detect faint, fast-moving asteroids is expected when the Large Synoptic Survey Telescope (LSST) starts observing the whole sky every 4 days, with its power to detect objects that are 30 times fainter than asteroid A/2017 U1 when it was at its closest approach to us.

The possibility of exploring in detail these asteroid visitors from other stars is extremely exciting. Nature is giving us a wonderful opportunity to examine the composition of the rocky material that is used to make planets in other stars. Directly visiting other planetary systems in other stars is not something we can contemplate with our present technology owing to the immense distances to the nearest stars to us, but we can study these small pieces from other planetary systems that happen to be visiting our Solar System. In the future, we can envisage having spaceships orbiting the Sun in highly elliptical orbits which, after an incoming interstellar asteroid is detected, could change their orbit to come to a close encounter with the asteroid, drop a hard object against it, and then collect some of the dust from the asteroid that would be released in the high-speed collision, and bring the dust back to Earth for detailed analysis. This would open up an exciting opportunity to learn about variations in the composition of every element and their isotopes in planets forming around other stars.

As the asteroid A/2017 U1 continues on its journey away from the Earth and the Solar System, we can only wonder the exciting science that will come through a new field of astronomy that has started with this discovery: the space distribution and composition of interstellar vagabonds.

Jordi Miralda is an ICREA professor, astronomer and scientific director at the Institute of Cosmos Sciences. Doctor in Astrophysics from Princeton University, he returned to Catalonia as an ICREA professor in 2005. His research is mainly focused on the field of theoretical astrophysics, and he tries to give physical explanations about the phenomena that we observe in the universe. Although his interests range from the formation of galaxies to the composition of the Universe, or the formation of massive black holes, in recent years he has focused his efforts on studying the large-scale distribution of intergalactic gas through quasar soundings. Currently, he investigates the techniques that delve into the nature of dark matter.

Dark matter, the formation of galaxies, and gravitational lenses

The existence of dark matter in the Universe has been corroborated by a great diversity of observations.

Dialogue about the nature of the Universe, with the participation of eminent astronomers of the modernism period

Next Sunday May 8th at 11 AM, the Astronomical Society of Terrassa (AST) has prepared a surprise performance fo

James Webb Space Telescope. The new tool to observe the faintest, more distant and more primitive galaxies of the Universe

The key astronomical date of this December is, without question,

Astrophysics began when observations of astronomy could be interpreted according to the physical laws governing the stars and other objects in the Universe.

The Llull's work and modern science

From the philosophy of Ramón Llull we can extract some concepts of modern science. In this article, we can see a critical version of the thought of Ramón Llull.
Author
Jordi Miralda, ICREA-ICCUB
Source
Revista Mètode
Language
CA
Monograph