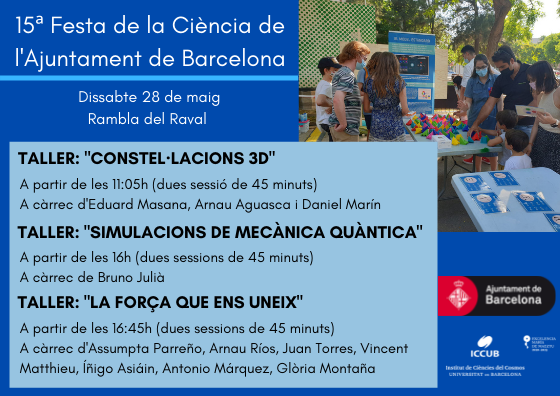 The Institute of Cosmos Sciences of the University of Barcelona (ICCUB) will participate in the 15th Science Fest of the city of Barcelona, which will take place at the Rambla del Raval on the days 28 and 29 of May 2022. This science gathering will offer attendants 190 activities related to science, technology, knowledge and culture, spread around several spaces and with the objective of bringing the research carried out in Barcelona closer to its citizens.

The science fest brings us a weekend full of free, attractive activities thought out for all audiences. The attendants will have the opportunity to peek into a number of scientific fields in very different formats: workshops, debates, performances or microtalks. The fest will be open to the public Saturday, May 28 from 11h to 21h and Sunday, May 29, from 11h to 20h.

This year, some of our proposals target specific topics contemplated in the International Years of 2022 to raise awareness and focus on sustainable development as well as current hot topics in many fields (experimental sciences, social sciences, humanities and arts):

The ICCUB is bringing three interactive workshops to the programme so attendants can learn physics in a hands-on, experimental way.

This workshop consists on running a series of computer simulations of a number of experiments where matter’s quantum properties are manifest. Discover the most intriguing phenomena of quantum mechanics such as the tunnel effect, Heisenberg’s uncertainty principle or the double-slit experiment by playing with our quantum systems simulations.

WORKSHOP: «THE FORCE THAT BINDS US TOGETHER»

The main character of this workshop is the strong nuclear force, which keeps the particles and subparticles that form matter bound together. Using dynamic puzzles, you will get a very visual understanding of the laws that combine these particles at the scale of atomic nuclei, protons and neutrons and at the scale of their subparticles, the quarks.

In this workshop, we will build the Orion constellation taking into account the position and distance to the stars that form it. Once we have built it, each attendant will record a space travel around Orion observing it from different perspectives.

The Institute of Cosmos Sciences of the UB<

By
Several
Talks in educational centres
Open to all

The ICCUB celebrates the 2022 Day of Scientific Culture

Going back to observe the Moon at the Palmera square

The Institute of Cosmos Sciences of the UB returns to the Palmera Square to perform a public observation of the Moon to celebrate its neighbourhood festivities.

On the occasion of this year's virtual edition of the VI Science Festival of the UB, the astronomer Eduard Masana explains in this video that it is the 3D Constellation Workshop, where the Orion constellation is built.
Author
Eduard Masana, ICCUB-IEEC
Language
CA
Popularisation of Science

The eclipse that changed our vision of the universe

Article of the astronomy section of the newspaper El Periódico "Diari Astronòmic", by Eduard Masana and Salvador Ribas, about the solar eclipse of 1919
Author
Eduard Masana, ICCUB
Language
ES