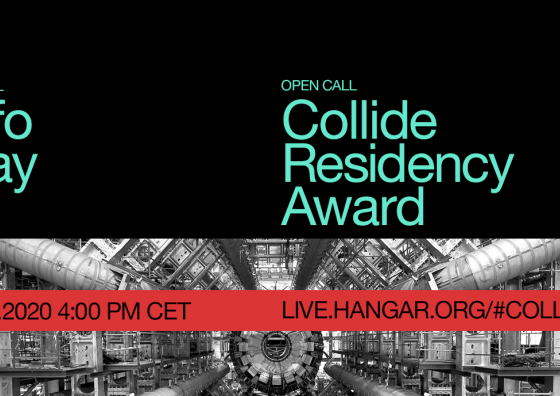 An online informative session about the Collide Award, an initiative to strengthen the relationship between science and arts.

Collide Info Day is an informative session about the Collide Award, organized as part of the collaborative framework between CERN, the European Organization for Nuclear Research in Geneva, the Institut de Cultura de Barcelona and the Barcelona City Council. The appointment is on November 13 at 4 pm and it will be celebrated online.

Collide invites artists across all creative disciplines and nationalities to apply for a research-led residency at CERN, and at various research centres in Barcelona, that will be hosted at Hangar Centre for Art Research and Production. The programme is targeted at artists with a strong motivation for scientific thinking and for interacting with the extraordinary CERN community.

Join the Collide Info Day to listen to the Collide team, which is formed by scientists from CERN and Barcelona. Moreover a former artist that was given last year’s Collide Award will also be attending the meeting and will explain his experience. The participants will introduce how the residencies work at Geneva and Barcelona, the involved scientific institutions, the terms and conditions of the call, and how to imagine significant dialogues between artists and scientists.

Xavier Luri is a professor at the Faculty of Physics of the University of Barcelona, ​​and director of the Institute of Cosmos Sciences. He is part of Gaia's research group at the ICCUB, where he researches on the processing and analysis of Gaia's data, and also on the design and implementation of mission archive operations. In orbit since 2013, the mission of the European Space Agency Gaia aims to make a detailed map of our galaxy. You can read the latest news on Latest of Gaia.

«Space in cinema: fiction and reality» at Santa Margarida i els Monjos

«Space in cinema: fiction and reality» at Aiguaviva Highschool

Spaceships that travel at the speed of light, teleportation, worm

Xavi Luri for AstroSabadell: Life on our Solar System

Is there life on other planets of our Solar System?

The first instants of the Universe

“The first instants of the Universe”.

«Art can help us overcome the trauma of the coronavirus crisis»

Interview with the artist in residence at the ICCUB Andy Gracie and the coordinator of Arts at CERN Monica Bello, about the relationship between art and science.
Author
Andy Gracie
Source
Universitat Oberta de Catalunya
Language
CA
ES
EN
Interview

Our astronomer Xavi Luri participates in the science section of the morning show "Són 4 dies" on the RNE 4 radio station, commenting on the science behind some of the most famous films about space.
Author
Xavier Luri, ICCUB [IEEC-UB]
Language
CA

First video of the virutal series of conferences "TOC-TOC", coordinated by the UB Divulga.