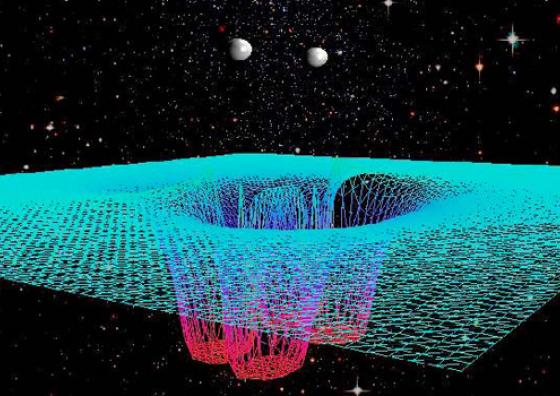 The international LIGO / Virgo collaboration formed by the two detectors LIGO, in the United States, and Virgo, in Europe, leads the detection and discovery of gravitational waves.

Gravitational waves are waves in the space-time fabric, produced when large masses are accelerated or deformed, which propagate at the speed of light. Resulting from the most violent phenomena in the Universe, such as the supernova explosions or interactions between black holes and between neutron stars, and are powerful enough to be detected with current instruments.

From theory to observation

We know of the existence of gravitational waves since the Theory of General Relativity publication in 1916. Einstein predicted that when two bodies orbit each other, ripples occur in space, in the same way as happens when we throw a stone to a water surface. Although we knew of its existence, the first detection of a gravitational wave did not occur until 2015, almost a hundred years later.

In 1974, researchers Russell Alan Hulse and Joseph Hooton Taylor of Princeton University detected some radio wave emissions with the 305m diameter Arecibo antenna. They identified the source as the emission of a pulsar, a highly magnetized and rapidly rotating neutron star, located in a binary star system. This experiment is considered as the first indirect demonstration of the existence of gravitational waves. The discovery of this pulsar and the possibilities it opened up in the study of gravitation, were awarded the Nobel Prize in Physics in 1993.

However, 40 years went by before the first direct detection of gravitational waves happened. The LIGO detectors observed, on September 14, 2015, the gravitational wave GW150914 (for the acronym in English of Gravitational Wave and the date, 2015-09-14). It was the product of a merging binary system of two black holes, which had happened 1.3 billion years ago. This observation was also awarded the 2017 Nobel Prize in Physics, jointly to researchers Rainer Weiss, Barry C. Barish and Kip Thorne, for their pioneering contributions to the LIGO detector.

The events and phenomena that produce gravitational waves are so extreme that they are impossible to reproduce in the laboratory. Besides, they usually happen at a great distance, so the waves that reach the Earth's surface are extremely difficult to detect. It took more than 50 years of scientific research and technological advances, by thousands of research teams around the world, to be able to observe them for the first time.

The LIGO and Virgo gravitational wave detectors are terrestrial laser interferometer antennas, located in the United States and at the European Gravitational Observatory in Italy respectively. The Virgo detector has of two arms that extend perpendicularly for 3 kilometres each. At their ends, the house all the machinery and instrumentation necessary to form the interferometer. The detectors have carried out three periods of observations -only two in the case of Virgo-, separated by periods of rest to develop technical improvements. After a very successful third period of observations (called O3), the collaboration is currently preparing the fourth period, called O4, which is planned to start in 2022.

The image on the right shows the operation of a laser interferometer. a) Laser light is sent into the instrument to measure changes in the length of the two arms. b) A "beam splitter" splits the light and sends out two identical beams along the arms. c) The light waves bounce off the mirror and return. d) A gravitational wave affects the interferometer's arms differently: one extends and the other contracts as they pass from the peaks and troughs of the gravitational waves. e) Normally, the light returns unchanged to the beam splitter from both arms and the light waves cancel each other out.

The ICCUB team in Virgo

Virgo has more than 550 researchers from 106 research centres in 12 different countries. The Institute of Cosmos Sciences began to be part of the Virgo detector in the summer of 2018. The Virgo group at ICCUB is mainly responsible for the development of electronic instrumentation to improve the interferometer. They also develop new techniques for data analysis and dynamic astrophysical models.

The Virgo team coordinator is our researcher and engineer Jordi Portell. He explains "Our involvement in Virgo is based on four main pillars: instrumentation, computing, data analysis, and scientific model development". Instrumentation is the part that encompasses the entire set of measurement instruments, responsible for sampling and processing the information coming from physical variables. Portell adds, "Our contributions to instrumentation improve the sensitivity of the instrument, detecting gravitational waves caused by more distant phenomena or caused by less massive objects. In computing, we use our experience in other large projects, such as the Gaia mission, to process the data more efficiently. Our new techniques on data analysis allow us to detect and describe gravitational-wave signals in a more sensitive way. And finally, we are working on developing astrophysical models that help us to improve our understanding of our cosmos".

But, what data do scientists get? And, how do you see the "traces" of gravitational waves? The researcher explains, "The interferometer makes measurements - converted to digital - which are, essentially, noise. Among all this noise, there are hidden signals - waveforms - corresponding to the gravitational waves," he points out. "It would be as if you were standing on a sidewalk on the Diagonal in the middle of the rush hour, trying to listen and understand what someone is saying to you from the other sidewalk. It is not impossible to hear it, but you have to characterize the noise very well and know what type of sounds you want to hear, to be able to understand it."

In June, the collaboration announced the discovery of a curious object, observed in August 2019. Researchers doubted whether to classify it as the most massive neutron star ever detected or the lightest black hole ever seen. Our researcher and ICREA professor Roberto Emparan commented on it on Radio Sant Cugat.

In September, the collaboration published two simultaneous articles in the magazines' Physical Review Letters and the Astrophysical Journal Letters respectively, analyzing the observation of a binary system formed by two black holes. ICCUB researcher and part of Virgo Mark Gieles explained the details in the science section of the podcast "Carne Cruda". On this occasion, the finding was detected by observing the gravitational wave resulting from the merger of the two black holes called GW190521. The resulting black hole is the most massive that has been detected with this method, with a mass corresponding to 142 times that of the Sun.

Jordi Portell is an engineer, works in data processing and analysis at the Technological Unit and is a researcher at the Gaia group and coordinator of the Virgo group at ICCUB. He has published more than 10 articles in scientific journals, is a co-author of a patent and has supervised two doctoral theses. Portell is also the technology director of the spin-off company of the University of Barcelona and the Polytechnic University of Barcelona, Dapcom Data Services, which markets data compression products.