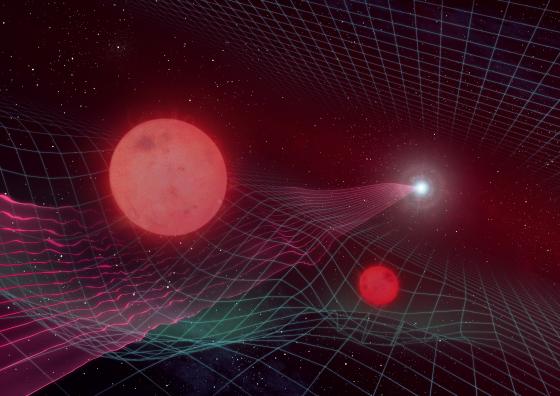 The study investigates an unusual brightening of a star. The ICCUB –IEEC astronomer Josep Manel Carrasco is one of the authors of the study.

The brightening of the star, located in the Cygnus constellation, was first spotted in August 2016 by the Gaia Photometric Science Alerts programme. This programme scans daily the huge amount of data coming from Gaia and alerts astronomers to the appearance of new sources or unusual brightness variations in known ones, so that they can quickly point other ground and space-based telescopes to study them in detail. The phenomena may include supernova explosions and other stellar outbursts.

In this case, the System alerted of an unusual brightening in one of the sources of light. The researchers spend 500 days performing observation on it, with more than 50 different telescopes. They found that the source of that light was a binary system named as Gaia16aye. The pair consists of two rather small stars, with 0.57 and 0.36 times the mass of our Sun, respectively. Separated by roughly twice the Earth-Sun distance, the stars orbit around their mutual center of mass in less than three years.

The researchers soon realized that this brightening was caused by gravitational microlensing, which is an effect predicted by Einstein’s theory of general relativity and caused by the bending of space-time near very massive objects - like stars or black holes. When such a massive object, which may be too faint to be observed from Earth, passes in front of another farther source of light, its gravity bends the fabric of space-time in its vicinity. This distorts the path of light rays coming from the background source, as a giant magnifying glass.Gaia16aye is the second micro-lensing event detected by ESA’s star surveyor. However, the astronomers noticed it behaved strangely even for this type of event.

“If you have a single lens, caused by a single object, there would be just a small, steady rise in brightness and then there would be a smooth decline as the lens passes in front of the distant source and then moves away,” says the group lider Łukasz Wyrzykowski. “In this case, not only did the star brightness drop sharply rather than smoothly, but also after a couple of weeks it brightened up again, which is very unusual. Over the 500 days of observation, we have seen it brighten up and decline five times.”

The astronomer Josep Manel Carrasco has been coordinating he participation of the Observatori del Montsec in the Gaia Science Alerts programme since 2005. The group has contributed with up to 2000 observations, obtained with the Joan Oró Telescope (TJO). That represents the 9% of the total photometric observations of Gaia16aye, which were obtained through more than 50 observatories. He explains, “The detection of binary systems through microlensing – such as Gaia16aye – allows measuring the mass and orbital parameters of those binary Systems. The same method that we used in Gaia16aye could be applied in the future to search for new multiple systems, regardless of their mass, so it might lead to new discoveries of very low-mass bodies such as planets, or very high-mass objects as black holes, that are currently invisible for the optical telescopes.”

Read the press release at the European Space Agency website  and the original paper at Astronomy & Astrophysics.

Talk "The Gaia mission: contents of the third catalogue and future prospects"

The researcher Jordi Portell, from the Technological Unit of the Institute of Cos

The ICCUB astronomer Josep Manel Carrasco appeared on the "La República Santboiana" program on October 26, 2022 to talk about the Artemis program to return to the Moon and about the DART mission, which has been able to successfully divert the orbit of the asteroid Dimorphos around its larger asteroid companion Didymos, with the impact of the DART Spaceship.

What does an astronomer do nowadays?

When we think of astronomy, we can imagine things like long nights, big telescopes and observations of planets and stars, but is this really the job of an astronomer these days?

Armageddon, Don't Look Up… There are many science fiction films where humanity is threatened by the impact of a giant asteroid. Is there any truth to these stories? Should we be worried?